Days after tornadoes ripped through the state – killing dozens and reducing entire neighborhoods to rubble – Kentucky craft breweries are rallying to support affected members of their communities.

“Thankfully, we checked in and all of our family members are safe,” Kentucky Guild of Brewers (KGB) executive director Derek Selznick told Brewound. “All of our breweries are safe, so right now we are just trying to step up as a community to help out where we can.”

Blue Holler Brew Supplies, a Bowling Green-based homebrew store and taproom, was “completely destroyed,” he said. A GoFundMe fundraising campaign has been started for the shop, which founder Chris Karraker opened in 2015, fundraiser organizer Megan Lee noted on the campaign page.

“Since then, he has made sure everyone can call this place a home, open on Thanksgiving and Christmas every year to serve warm home-made meals for the community,” Lee wrote.

Clean up at Blue Holler has already begun with the help of volunteers, Karraker noted on Blue Holler’s Facebook page. 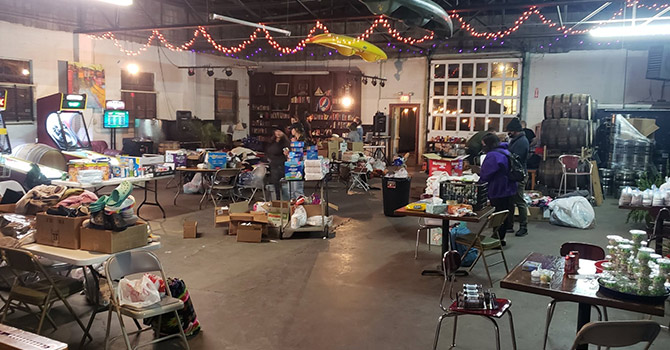 Bowling Green-based Gasper Brewing is collecting supplies to be donated to residents who lost their homes in the storms.

In addition, local breweries are leading initiatives to aid families affected by the natural disaster.

“Our membership has already stepped up and been engaged,” Selznick said. “Gasper Brewing in Bowling Green has been feeding people and yesterday, thanks to Ethereal Brewing out of Lexington and Against the Grain of Louisville, we were able to do 120 boxes that went to 50 families.”

Breweries in the state’s western region are collecting donated supplies at other breweries across the state and distributing them to affected residents. However, with space becoming limited, monetary donations and gift cards to grocery stores and mass retailers such as Kroger or Walmart are “the most effective thing,” Selznick said.

“As soon as we heard the news, we knew we needed to act quickly to help these impacted communities,” Gopuff co-founder and co-CEO Yakir Gola said in a press release. “When the communities we serve need help, Gopuff will be there. We also urge our consumers to donate to Team Western Kentucky Relief Fund.”

In June, Gopuff acquired Liquor Barn, a Louisville-based off-premise alcohol retail chain with 23 brick-and-mortar locations in the state. None of those locations were affected by the storms, nor were any Gopuff fulfillment centers.

The Kentucky Guild of Brewers is also funneling donations through its Helping Our People (HOP) Foundation, which was created during the COVID-19 pandemic, to purchase supplies for breweries that are distributing them, Selznick said. Louisville-based Goodwood Brewing and Spirits donated $1 from every pint sold over the weekend to the Western Kentucky Red Cross and Humane Society.

Hi-Wire Brewing is collecting supplies to donate all week at its Louisville taproom, the brewery shared on Instagram.

“It’s been a terrible couple of days, but the one thing I will say is, the brewing community – it’s not just bars and alcohol, right?” Selznick said. “It is literally being a community space. For example, at Gasper Brewing, family members were meeting each other in Bowling Green finding out if they were safe or not. So, to say that I am proud to be a part of this community is an understatement.”