After a two-year hiatus imposed by the global pandemic, the International Organisation of Vine and Wine (OIV) is hosting its 43rd annual congress this week in Ensenada, Baja California, Mexico. There is a sense of celebration among participants, but the joy of sitting around the same table again is clouded by urgency and worry as the industry faces significant challenges.

The congress, a key event in the wine industry’s calendar, brings together a unique mix of stakeholders, including producers, academics, service providers and lawmakers. They discuss some of the most pressing issues faced by the wine world in the present and future. This edition also serves as an opportunity to assess the first final estimates for the 2022 harvest.

A complex and challenging context

Speaking at the event’s opening lecture, Pau Roca, OIV’s director general, gave an overview of the wine sector’s current state of affairs, before presenting the year’s key numbers. The fact that the event has climate change resilience and water management as two of its core topics, reflects the industry’s main challenge: the viticultural pressures caused by extreme weather events. Yet, the sector has had equally serious difficulties on the logistic and economic fronts.

Still dealing with the supply chain and distribution disruptions caused by Covid-19, the industry now faces rising production costs and continued scarcity of raw materials. Both issues are exacerbated by the energy crisis caused by Russia’s invasion of Ukraine. Inflation will continue to place producers under severe pressure, especially as this will constrain consumer’s spend on non-essential items.

Roca highlighted, however, that the operational, logistical and economic challenges faced by the wine industry today are far from unprecedented. The OIV can trace its own origins back to periods, in the early 20th century, when deep economic and geopolitical shifts placed the industry under threat. The truly unprecedented and long term difficulties are, therefore, those of an environmental nature.

This year’s severe drought as a stark wake up call according to Roca. ‘Climate change is real and is, beyond doubt, one of our sector’s most important challenges,’ he said. ‘The weather anomalies have become the new normal, and we should probably acknowledge their regular occurrence instead of treating them as emergencies.’

Even if most wine-producing countries recorded severe drought and heat waves, world wine production is expected to remain stable in 2022 at around 260m hl, a 1% decrease from 2021. This does mean that 2022 is set to be the fourth consecutive year in which global production sits slightly below average.

In the European Union, yields were higher than initially expected thanks to rainfall right before harvest. Still, these results have different meanings for key European countries.

France is recovering from the disastrous 2021 harvest, with predictions for production of 44.2m hl, an increase of 17% compared to 2021. Meanwhile Spain (-6%) and Greece (-29%) saw significant decreases in production due to the severe drought across almost all of the countries’ regions. Germany also posted a positive performance, with 8.9m hl, an increase of 2%. But Italy remains the world’s top wine producer in terms of volume, at 50.3m hl, in line with the 2021 harvest.

On the other side of the Atlantic, the US recorded a decrease of 4% at an estimated production of 23.1m hl. This was also a product of the extremely dry weather.

Wine production in the Southern Hemisphere was 7% lower than the record-high 2021, but in line with the average of the previous five years. Chile was the biggest producer south of the Equator, with volumes of 12.4m hl. This figure is 7% below last year’s exceptionally high production, but still 7% above the country’s five-year average.

Chile is followed by Australia, which recorded a significant decrease from last year, down 18% at 12.1m hl. New Zealand was a positive outlier, recording its largest production ever – 3.8m hl and 44% more than in 2021 – thanks to favourable climate conditions.

Defending the legitimacy of wine

A look at the evolution of the area under vine, reveals a steady decrease since the turn of the millennium. The trend has been driven by the strict limitations to new plantings in the EU and to a slowdown in China’s expansion of its area under vine. The latter can be seen both as an adjustment after a period of exponential growth and as a response to changes in demand.

Indeed, consumer trends in China have also impacted on world wine consumption levels, catalysing a consistent negative trend since 2017. Following the relaxation of Covid-19 restrictions, most countries have  returned to pre-pandemic levels, supporting a 1% increase in consumption in 2021. On the  other hand, China continues to decrease consumption, with a whopping 9m hl less wine consumed per annum in 2021 than a decade before. 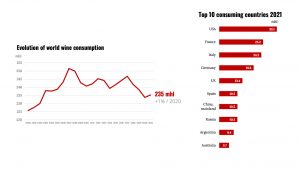 According to both Roca and Luigi Moio, president of OIV, the overall negative trend is a product both of wellness trends and of the reinforcement of prohibitionist lobbies. ‘We need to be assertive in distinguishing alcohol from other alcoholic beverages,’ said Moio. ‘Wine is unique due to the way in which it is produced, enjoyed, and inextricably linked with food.’

Despite challenges on so many fronts, Roca left a message of pragmatic optimism. ‘The disruption caused by this chain of negative events can and should be seen as an opportunity for the sector to shape, apply and test alternative operational models – and design new ways to move forward.’

Roca mentioned the wine sector’s ‘biodiversity’ as a natural source of adaptiveness and resilience. New forms of governance and a consolidated shift to hybrid models where digital resources play a central role, will be, in his opinion, fundamental to mitigate, if not solve, many of the issues at hand. Roca also underscored the importance of wine tourism, not only as a key channel of economic sustainability, but also as an essential educational tool through which consumers can engage with the complex and fascinating world of wine.