The official unveiling ceremony happened last night (30 November) in Bordeaux’s Palais de la Bourse, which revealed both the original artwork and the newly-printed label on a large-format bottle.

Introducing the artist and artwork at the event, Julien de Beaumarchais de Rothschild, co-owner of Château Mouton Rothschild with responsibility for the estate’s artistic and cultural activity, described the special project as an ‘honour’ and a ‘one in a lifetime moment for both Mouton [and the family] and Peter’.

Doig, who is known for his flair for contemporary art and representational painting, revealed that he researched previous labels to see ‘what was done before’ as he ‘didn’t want to step on any toes’.

Speaking in front of the 90-strong crowd, that included members of his and the Rothschild family, Doig said the aim was to ‘create something unique’.

Drawing on influence from French painters Jean-François Millet and Vincent Van Gogh, Doig described the artwork as a ‘dreamscape’ and called it an ‘homage to the people who work in the vineyard and pick the grapes’ adding that of all the label works he had seen ‘there was nothing that really referred to that aspect of the production of wine’.

‘It’s perhaps not typical for a wine label to depict a moon, it should be a sun maybe, but I thought my picture was more about a dream, a revery of this, and the winemaking process.’

The work also carries a personal significance for Doig, with the main character referencing his good friend, the late Trinidadian artist known as Embah (Emheyo Bahabba) who brought a four-string guitar to one of Doig’s exhibitions in Paris and shared his music and poetry during the course of the evening. Doig also spent a part of his early childhood in Trinidad, and still splits his time between the Caribbean island as well as London, together with his eight children.

‘For a very grand wine, I thought it was important to show the workers and the activity of grape picking and people gathering in the vineyard. Being reminded of his friend, Doig said he ‘also thought maybe there’s sometimes someone walking through vines playing a guitar’.

Doig, who is used to working on a much larger scale, said the final image could have been a sketch but ‘thought it should be a painting’.

In his official statement, he said: ‘The painting shows something of what goes on behind the scenes in the production of wine, what happens offstage, as it were.

‘It’s a sort of ode to workers, to all those involved at the various stages of making a wine before it’s finally bottled.

‘It’s a dream with a romantic streak, as if someone spontaneously decided to sing in the vines. It’s a moment of poetry, where you can take your time. It’s neither really day nor really night, but rather something in between, between waking and sleeping. It is possible to see it as a progression, a dream journey in the world of the harvest.’

de Beaumarchais de Rothschild, who maintains relations with the artists who create the original artworks for the label of each new vintage, explained: ‘We wanted an artist who uses canvas and pictorial material to express figurative subjects. Unrivalled as a colourist, Doig focuses entirely on painting and has become one of his generation’s foremost exponents of the discipline, holding exhibitions all over the world.

‘There is something very special about his technique and his universe that sets them apart in contemporary figurative art. His subjects are very varied, his painting resists any classification: he has succeeded in creating his own, inimitable world.’ 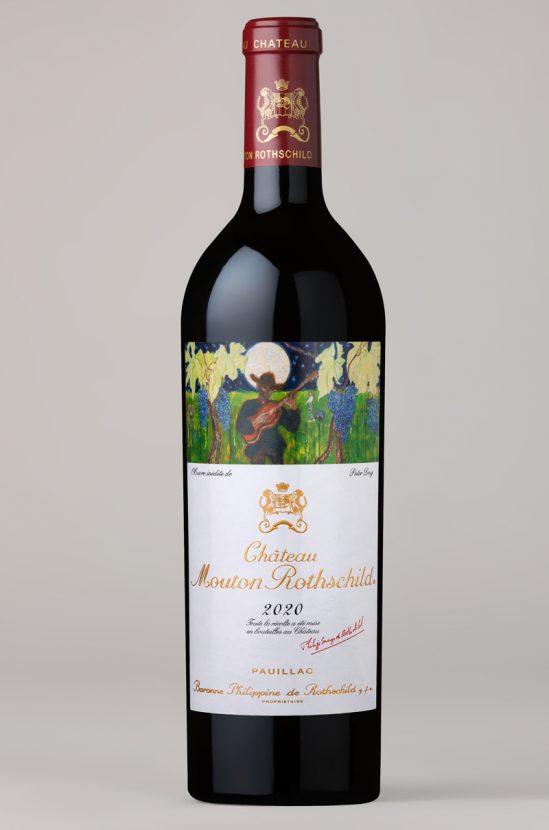 In conjunction with the official label release, Sotheby’s and Château Mouton Rothschild have united for an exceptional auction offering bidders the chance to buy ‘a unique superlot’ of wines from the 2020 vintage. The lot includes the only Nebuchadnezzar made in 2020, three magnums, an imperial, a double magnum signed by the artist and the family, and six bottles of Château Mouton Rothschild 2020

Proceeds of the auction will go to benefit the firefighters of the Bordeaux region.

In a joint statement, Château Mouton Rothschild’s owners, Camille Sereys de Rothschild, Philippe Sereys de Rothschild and Julien de Beaumarchais de Rothschild, said: ‘In 2022, which promises to be a great vintage, parts of our region were ravaged by major wildfires. That is why, as we reveal the artist and the artwork created to illustrate the label of Château Mouton Rothschild 2020, we have decided, in partnership with Sotheby’s, to organise the sale by auction of an exceptional lot, the entire proceeds from which will be donated to the firefighters of the Gironde department. In doing so, we wish to add our voice to the universal expressions of gratitude and admiration they so richly deserve and support their work in a practical way, especially in terms of prevention.’

Jamie Ritchie, worldwide chairman, Sotheby’s Wine & Spirits, said: ‘The quality of the wines of Château Mouton Rothschild has never been higher, which is reflected by the increase in global demand. At the same time, Mouton Rothschild pioneered the practice of selecting artists and requesting them to create works of art that illustrate the labels. Each year, since 1945, this has added to the story about each vintage and to their allure to collectors. 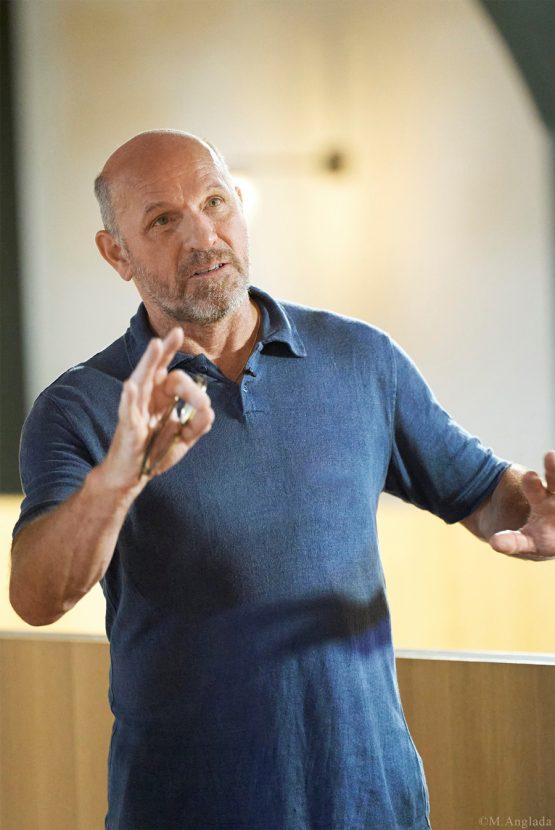 Doig was born in Edinburgh in 1959 and moved to Trinidad when his family relocated in 1962 for his father’s job and later to Canada in 1966. He moved to London in 1979 where he studied at the Wimbledon School of Art and later received his MA from the Chelsea College of Art and Design in 1990. In 2000, he was asked by his friend Chris Ofili to join an artist residency in Trinidad. Enamoured by the country once again, he moved with his wife and children to live there in 2002 before returning to the UK some years later.

His work has been the subject of several major museum and gallery exhibitions worldwide including at the Tate Britain in 2008, the Scottish National Gallery for ‘Peter Doig: No Foreign Lands’ in 2013, Foundation Beyeler 2015 and the Museum of Modern Art Tokyo in 2020.

In 2007, his painting White Canoe was sold by Sotheby’s for $11.3m, which was, at the time, a record for a living European artist. Today his pieces can be seen in collections held at the Art Institute of Chicago, the National Gallery of Art in Washington, D.C., the Tate Gallery in London, and the Goetz Collection in Munich.

His upcoming exhibit will be at the The Courtauld Institute of Art, London, opening in Febraury 2023.

He also held teaching positions for a number of years, notably at the Academy of Fine Arts in Düsseldorf, where he held a professorship from 2004 to 2017. Doig also served as a Trustee of the Tate Gallery from 1995 to 2000.

About the artist collection

Since 1945, the label for each vintage of Château Mouton Rothschild has been illustrated by an original artwork. They enhance a unique collection of contemporary art by different artists from a wide variety of backgrounds, including Dalí, César, Miró, Chagall, Picasso, Warhol, Soulages, Bacon, Balthus, Tàpies, Jeff Koons, David Hockney, Annette Messager and Olafur Eliasson.

All the artworks can be seen in the Paintings for the Labels exhibition, created by Baroness Philippine de Rothschild in 1981 and on permanent display at Château Mouton Rothschild since 2013.